Generally, when positioning, start with the moving mounting point approximately 1/3 the length of the lid from the hinge as shown in figure two below:

Typical mounting points example. This provides an approximate guide as to where to place a strut, but if this is developed further it will also give an indication of the size of the required product. 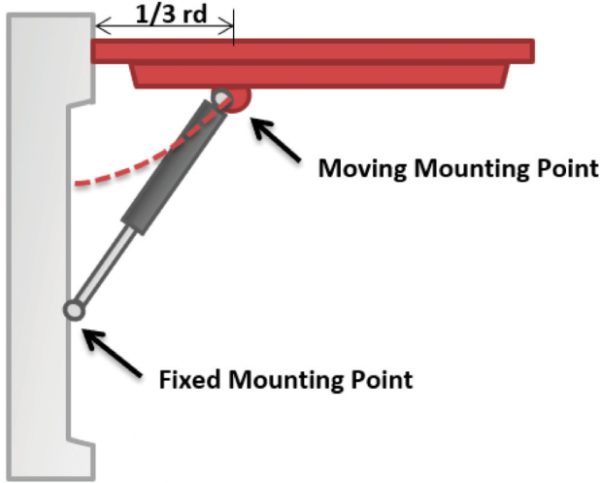 Typical mounting points example. This provides an extremely rough guide as to where to place a strut, but if this is developed further it will also give an indication of the size of the required product.

There are two differing mounting orientations available, the ‘Push Up’ and ‘Flip Over’ mounting. In both cases, it should always be mounted “rod down” when in the fully closed position to ensure proper lubrication of the seal package.

Generally, Camloc’s preferred mounting is the ‘Push Up’ design orientation.

Unless a means is utilised to lubricate the rod, then the strut should always be mounted rod down to ensure proper lubrication of the main seal. The main limitation of this mounting position is the additional strength required in the hinges of application being lifted.

The most prominent advantage of this type of mounting and rod down orientation is that it provides consistent damping at the end of the stroke. This is due to oil always being at the bottom of the tube; thus, damping will always occur at the same point in the lift cycle. 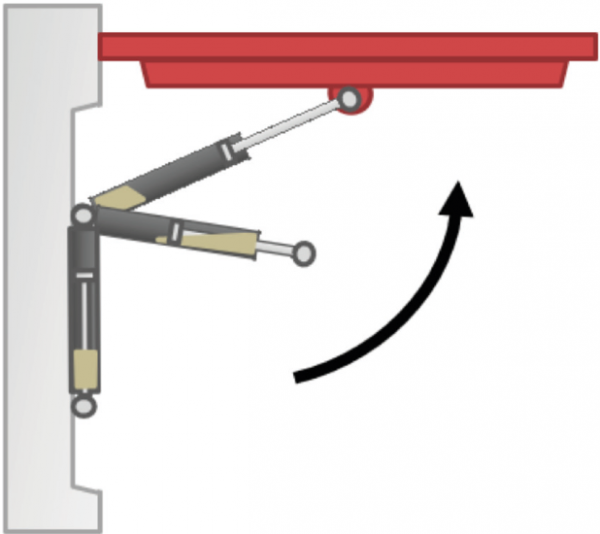 Unless a means is utilised to lubricate the rod then it is advised to mount rod down, this is because it ensures proper lubrication of the main seal in the closed position.

The main limitation of this mounting position is the lack of damping control throughout the stroke. At the start of the stroke, the oil is at the bottom around the main seal. As the horizontal position is passed, the oil begins to run down the tube towards the tube end.

The main advantage of this design is that it results in less strain on the hinges than the push up design. 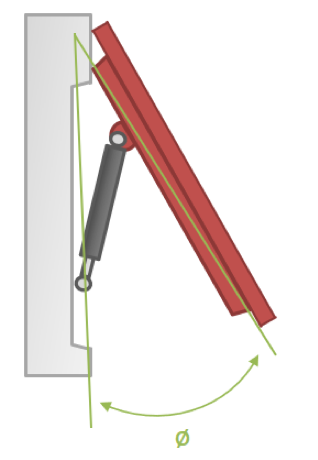 Crossover is the point at which the strut takes over the lifting action (or gravity takes over to close). This is often around 10° to 30° from fully closed. In practice, this will vary by several degrees between opening and closing, due to external factors such as friction of the internal components of the spring, hinges and end connectors.

Self-rise is the angle at which the lid is lifted without any assistance from the operator. Similarly, self-close is the angle at which the lid will close without any assistance. In most cases, it is undesirable to have the lid open without any operator input (referred to as “instant lift”). This behaviour is sometimes unpredictable to the operator and can allow the lid to open without any prior warning, in instances where the P1 force increases above nominal due to elevated ambient temperatures. 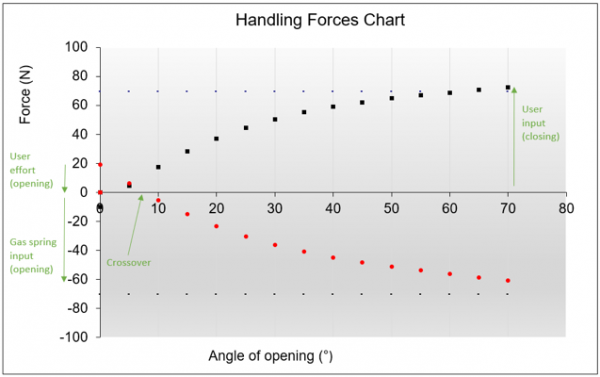 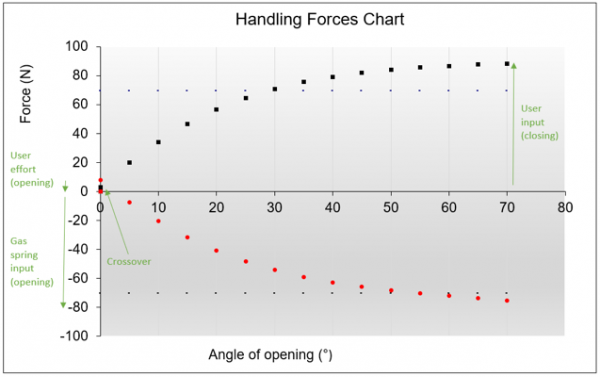 When the ambient temperature increases to 65°C (for example, in the case of an engine cover application), lift will occur almost instantaneously. This behaviour is often unpredictable to the operator and in some cases proving dangerous.

It is also evident that handling effort to close the application increases. For these reasons, it is important that understanding of what the ambient and ‘normal’ operating temperatures of an application will be, so if necessary, a suitable compromise can be made in handling performance.

When in the position to mount a damper, should it be rod up or rod down? The answer to this is dependent on whether the damper is a compression or extension damper; each one has specific orientations and should be mounted as follows:

Our engineers advise that when positioning, allow 10mm of unused stroke. This is because this will allow for the stack up of manufacturing tolerances in the application, preventing “bottoming out” before the lid is fully closed.